A Facebook group called ‘Karens United’ has been set up by women named – you guessed it – Karen to protect themselves from the stigma that is associated with it. 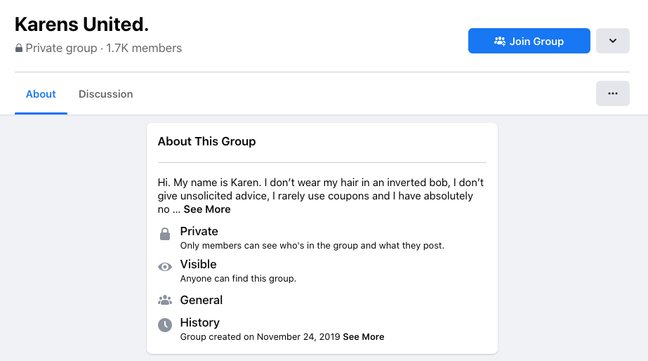 I’m sorry, but I had to. In case you’re unaware, the name ‘Karen’ has recently become synonymous with privileged white women who ask to speak to the manager in an entitled tone of voice, often speaking down to staff, especially to those of colour.

It was even used in the aftermath of last summer’s Black Lives Matter protests, which saw videos being posted of white people aggressively confronting people of colour just for standing on the sidewalk, walking through a park, or just for being outside their own homes.

These clips often go viral, and the women are typically branded as ‘Karen’(s). However, the term has been criticised by Julie Bindel, a writer for The Guardian, as sexist, ageist, and classist.

At the time of writing, the Facebook group has over 1700 members and states: ‘I don’t wear my hair in an inverted bob, I don’t give unsolicited advice, I rarely use coupons and I have absolutely no friggin’ desire to speak to your manager. I’m just a mom trying to juggle my home, my job, and my family.’

‘Can you imagine, you are just minding your own business when suddenly the internet blows up with memes blaming you for everything from causing excess stress for retail employees to destroying the environment? What. The. Everliving. Heck,’ the description adds.

The woman went on to explain that many Karens initially laughed at the trend, but now ‘something needs to be done’. She continues, ‘Right now, if you are a Karen who is sick and tired of seeing your name associated with offensive memes, I beseech you to join this crusade. We will not stand for this injustice any longer. It’s time to fight back. Karens of the world, unite!’ 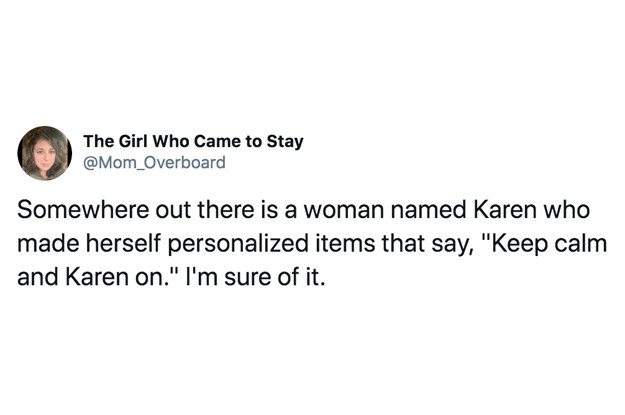 The new group aims for anyone named Karen to have a space to vent and be around other Karens, whilst trying to ‘reclaim’ their name.

My two cents? Using certain names to describe personality traits is nothing new – think Plain Jane or Debbie Downers – and while I have no idea what it’s like to be a Karen, it’s pretty ironic to make a Facebook Group ‘to fight back’…